The band were delighted to return to St John’s Church, Yeovil last evening for the third year running, interestingly each year under the direction of a different Musical Director due to various commitments but pleased our permanent MD; David Boorer was at the helm for this joyous evening.

Our evening concert commenced with Paul Lovatt-Coopers ‘Fire in the Blood’ commissioned by Dr Stephen Cobb for the 120th anniversary of the International Staff Band of the Salvation Army.

Our first half of the concert contained the first two of four solo features of the evenings concert. Firstly our soprano cornet player; Matt Osborne with a beautiful performance of ‘Flowerdale’ from Hymn of the Highlands and then later on our front row cornet player; Jon Hall with a fine performance of ‘Don’t Doubt him Now’ by Leonard Ballantine. The first half concluded with an arrangement of Welsh Melodies including Men of Harlech and Sosban Fach.

Our second half opened with a lively fanfare ‘Solidus’ before changing the tempo with our third solo feature; ‘Share my Yoke’ beautifully played by another of our front row cornet players; Anne Stone.

Our fourth and final solo feature; Eine Kleine Nachtmusik was to be of a comical nature; introduced as another soprano solo by Matt only to be “interrupted” by our Eb bass player; Andrew Symes who’d researched the ‘bass players manifesto’ that states “no concert can have four solos and not one feature the bass section”?! Who knew?! Well done Andy!

Our concert concluded with Amazing Grace, Calling Cornwall by Goff Richards and aptly due to the setting for our concert ‘I’ll walk with God’ by Mario Lanza.

Thank you to everyone at St John’s Church for inviting the band back to perform at this beautiful venue, helping to raise funds to maintain the church building.

Thank you to Kevin for helping us out on Euphonium for the evening and also thank you to returning players; Colin, Claire and Chris. We hope we’ll see you all again very soon!

Lastly thank you to everyone who attended the concert and we hope you all enjoyed it as much as we did performing to you all. 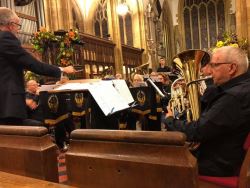 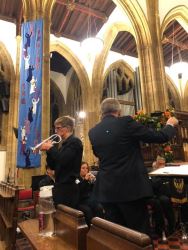 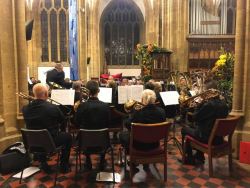 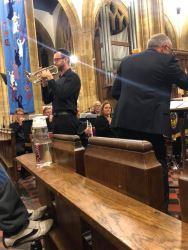 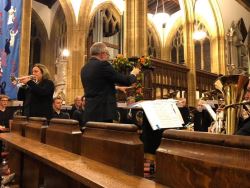 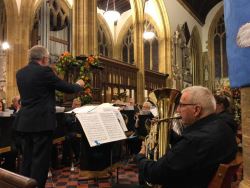 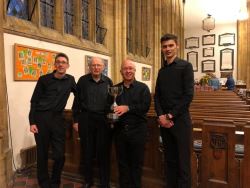 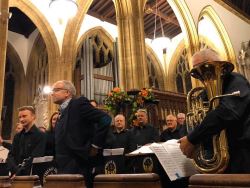 *photos with thanks to Merryn Ellis